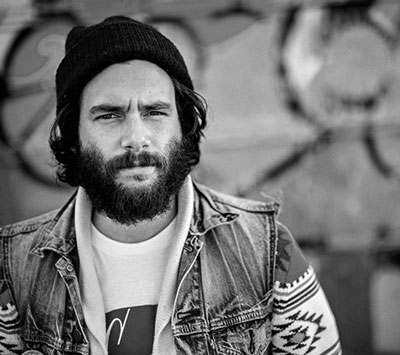 Adam Baldwin is a Dartmouth, Nova Scotia based musician and songwriter, perhaps best known as a member of Matt Mays’ band since 2008. His self-titled EP, released in 2013, won the Nova Scotia Music Week award for Male Artist Recording of the Year and he was named Musician of the Year in 2014.

Baldwin’s debut full-length album is called No Telling When (Precisely Nineteen Eighty-Five) and was released on June 24, 2016. The album was produced by Liam O’Neil (The Stills, Metric) and also features the talents of Josh Trager (Sam Roberts Band), Brian Murphy (Alvvays) and Leah Fay (July Talk).

Of making the record in Toronto during the lead up to the last federal election and the Blue Jays dramatic playoff run, Adam says: “Toronto was alive… indeed, Canada was alive. I walked down Dundas and Ossington every day to the studio and passed hundreds of election signs. You could feel the hope and you could feel the fear. It was on everyone’s tongue. If folks weren’t talking about the election, they were talking about baseball. The Toronto Blue Jays, an entity that falls just below rock and roll in terms of my devotion, had ended a playoff drought that almost precedes my memory. The Jays’ run into the American League Championship Series was the perfect foil for the very stressful federal election.”

The title track and first song describes events in New York City in 1985 (the year before Adam was born) and suggests how, thirty years on, not a lot in our culture has really changed. A particular unnamed real-estate developer, reality TV star and politician personifies this idea.

The first single “Daylight” was inspired by the political events in Canada surrounding the recording sessions. From Adam: “It’s a song about both the unity and division we felt as a country. It’s a song that should remind us that this change was spurred by a desire for a different direction, and that while our course appears to have changed, we have to demand that it continue to do so.”

“Anytime” and “Sparrow Song”, both featuring back up vocals from Leah Fay, loosely form a two act play and the centerpiece of the album. In “Anytime” Adam sings about young love and all the hopes and fears that come with that, while “Sparrow Song” describes those fears when they become reality.

“Rehtaeh” is about the systemic failures that led to the death of Rehtaeh Parsons in 2013 and is, as Adam puts it “maybe the most important song I’ll ever write.”

The album closes with “Living Proof”, a song about the Canadian Dream, and how as Adam points out, “The dream is elusive because it isn’t made available to everyone. It can’t be attained by just anyone.”