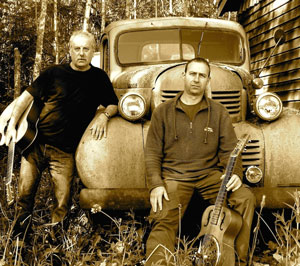 Breeze and Wilson have been writing, recording and playing music together for ten years. Based in Staffordshire, England, they’ve developed a reputation as a refined and extremely talented duo. They are a stellar example of what can be achieved with two voices and two acoustic guitars. Harmonically rich, musically and lyrically diverse, they invite comparison to Simon and Garfunkel, Seals & Crofts, and fellow countrymen Gallagher & Lyle. They operate on the outside edge of British folk music, unless it’s British folk music that traveled across the Atlantic to the New World more than three centuries ago. Their tastes run to Lyle Lovett, James Taylor, Guy Clark and Alison Krauss. Following two well-received EPs, Breeze and Wilson have released Oh Nova Scotia, their first full length album. Made in their home studio in the Midlands, it provides an emphatic answer to the question, who’s making music for grown-ups anymore? From the opening track, the story of their being championed by a radio show in Canada’s eastern provinces, through the beautiful and languid Waltz, to the film-noir murder ballad Beacon Hill, to the hilarious live-recording of the Banjo Song, Breeze and Wilson will hold your attention and echo in your head long after the CD finishes playing. (STAN CAREW – CBC RADIO HOST)
Have a listen here