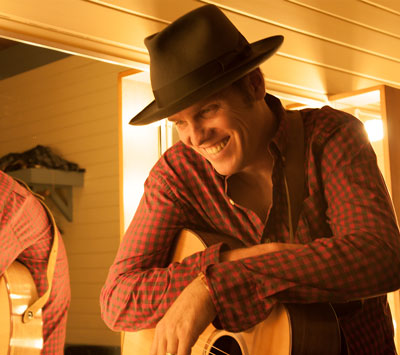 “Truly, what makes Gunning so remarkable as an entertainer is his rare gift to be able to befriend the audience as a whole from the stage throughout the course of the concert. And, indeed, you do feel as though he’s as good of a friend as any after a night of songs, stories and lighthearted laughs.” – The Guardian

Call it the silver lining in the cloud of a brutally cold Nova Scotia winter. When acclaimed folk singer/songwriter Dave Gunning decided it was time to make his 11th solo album, he found the bleak weather outside a blessing, not a curse. “We were literally snowed in, but the power was on and I was good to go,” he says of the making of that album, Lift.

Eleven albums in, Dave Gunning has become a truly masterful songwriter, one who has earned real peer respect from such Canadian folk songwriting legends as Ron Hynes, David Francey, and James Keelaghan. “I grew up listening to people like Ron Hynes,” says Dave. “I look up to them but then it hits me sometimes that I’m their peer and they like my stuff too. It’s a weird headspace, flipping from being a fan to being a peer.”

Co-writing with his peers has had a major impact on Gunning. “The co-writing process has really helped my career, as it helps you keep the energy momentum going,” he explains. “Noted co-writers on Lift include Matt Andersen, Thom Swift, Catherine MacLellan, Jamie Robinson, plus American Sally Spring and Dave’s Pictou pals, Jim Dorie, John Meir, and Ray Stewart. One song here, “Alberta Gold” has already been something of a radio and video hit for Matt Andersen, who included it on his popular album Weightless. Gunning’s banjo-fuelled campfire singalong version is equally rousing in its depiction of the present-day migration of Maritimers to the Albertan oil patch.

The 13 songs on Lift cover refreshingly broad lyrical terrain. Story and character-based songs fit snugly alongside more personal material, and in true folk music tradition, some numbers could be considered protest songs. Gunning acknowledges that “this album has more personal and introspective songs than my past recordings. I do still love songs that are about things and tell a real story, like the songs of Stan Rogers. They inspire me.”

A fine example of that here is “I Robbed The Co. Store,” which tells the true story of a group of British settlers in Nova Scotia in the 1770s forced to steal from a storehouse reserved for troops just so they could feed their families. A more contemporary song with a Pictou County setting is “They Don’t Do That No More.” “That one is inspired by the fight we have here against a pulp mill that is just an environmental disaster,” explains Gunning. The mournful sound of the pedal steel punctuates his lament that “there’s poison on the harbour floor.” It’s a song one of Dave’s key inspirations, the late folk great Pete Seeger, would have been proud to call his own.

Another song, “Sing It Louder,” is actually a tribute to Seeger. “My goal was to write a song you could imagine him singing,” says Gunning. “As folk singers we should all aspire to carry the torch of Pete Seeger and his message of social justice.” Dave’s talents as a poetic lyricist are vividly displayed on the haunting “Breaker’s Yard” and the plaintive “Pasadena,” a co-write with Catherine MacLellan.

Gunning’s recording career is now approaching a full two decades in length (his debut album, Lost Tracks, came out in 1996). Along with richly-deserved peer respect, he has also earned a shelf full of music industry awards. That tally now stands at eight East Coast Music Awards and two Canadian Folk Music Awards, plus a 2012 Juno Award nomination in the Roots & Traditional Solo Album of the Year category for his album …a tribute to John Allan Cameron, a compelling homage to another of Dave’s Maritime musical heroes.

His songwriting skill has also been internationally recognized, with earlier tunes scoring victories and high placings in some major international songwriting competitions. As a fervent hockey fan, Gunning was also thrilled to win the CBC’s hotly-contested Hockey Night In Canada Song Quest in 2014 with “A Game Goin’ On”, a co-write with David Francey.

Give yourself a Lift and check out the work of an authentic artist at his creative peak.