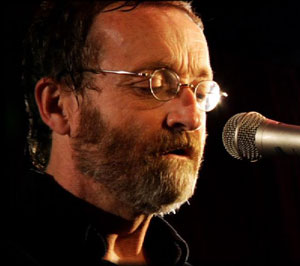 David Francey is a Scottish-born Canadian carpenter-turned-songwriter, who has become known as “one of Canada’s most revered folk poets and singers” (Toronto Star). Born in Ayrshire, Scotland to parents who were factory workers, he moved to Canada when he was twelve. For decades, he worked across Canada in rail yards, construction sites, and in the Yukon bush, all the while writing poetry, setting it to melodies in his head and singing it to himself as he worked.

A truly authentic folk singer, Francey is a documentarian of the working person who never imagined earning a living from his music. But when he was in his 40s, his wife, artist Beth Girdler, encouraged him to share his songs and sing in public. The reaction was instant. His first album Torn Screen Door came out in 1999 and was a hit in Canada. Since then, he has released eleven albums, won three Juno Awards and has had his songs covered by such artists as The Del McCoury Band, The Rankin Family, James Keelaghan and Tracy Grammer.

Francey also had the honour of receiving the prestigious SOCAN Folk Music Award as well as taking home the Grand Prize in both the International Acoustic Music Award and in the Folk category for the John Lennon Songwriting Award.

“David’s straightforward songs tell honest stories of real people and real places. Poetic perception and a keen eye for the heart of the matter are trademarks of the man and his music. His songs and stories are a direct connection for audiences seeking depth and meaning in the day-to-day.” Shelter Valley Folk Festival

David Francey was born in Ayrshire, Scotland where he got his first taste of the working life as a paperboy. At age 10 he was devouring the newspapers he delivered, establishing a life-long interest in politics and world events while developing the social conscience that forms the backdrop of his songs.

He was twelve when his family immigrated to Toronto. He says he can trace his love of the land, the history, and the people of his adopted country to weekend family drives exploring southern Ontario. Music played a large part in these family outings. They sang traditional Scottish tunes as they drove through the Canadian countryside. Dad and sister Muriel sang melody, while mother and David sang harmonies.

His attachment to Canada grew with travel. He hitched across the country three times, then thumbed his way to the Yukon. This attachment surfaces in his songs of rail lines, farms, and the St. Lawrence Seaway. He grew to understand the people while working in Toronto train yards, the Yukon bush, and as a carpenter in the Eastern Townships. These experiences colour his first CD, Torn Screen Door, with songs like Hard Steel Mill, Gypsy Boys, and Working Poor and his second, Far End of Summer, with Highway, Flowers of Saskatchewan and February Morning Drive.

In concert David is a singer and a storyteller. His wry humour and astute observations combined with his openhearted singing style have earned him a loyal following.

David lives with his wife, artist Beth Girdler and in the quiet but charming Lanark Highlands in southern Ontario. They are visited often by their son Colin, daughters Amy and Julia and grandkids Tristan and Alice.