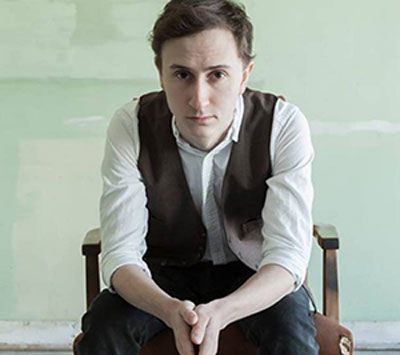 With a sprawling vocal range and compelling approach to composition, Menzie has made an indelible mark in the talent-rich Atlantic Canadian music market with his debut EP, Heather Avenue, in 2013. The release – which earned Music PEI Award nominations and acclaim from industry influencers – led to high-profile performances throughout the Maritimes, including opening slots for City & Colour and Ron Sexsmith.

In 2016, Menzie was a finalist in CBC’s annual Searchlight competition on the back of his breakout single, “Kenya,” which then spent two weeks at number one on CBC Radio 2’s Top 20 leading up to the release of his 2016 album Adolescent Nature.

The record, anchored by the strength of songs like “Kenya” and the follow-up single “Talk to Me,” showcases the pure emotion one can extract from simply a great voice and keen sense of dynamics.

“I started out writing everything on acoustic guitar, though more recently, I’ve been bringing everything down to basic piano chords, and if the song can still move me and move people, I know I’m onto something,” he reveals about his creative process. “Once I’ve got that solid foundation, everything else is just colour and texture.”

Drawing clear influence from the likes of My Morning Jacket, Led Zeppelin, Radiohead, and Joel Plaskett without being derivative of any one, the quality of these songs heavily belies the young artist’s age.

In fact, the lyrics – as the album title might suggest – are the only thing here that could clue one in on Menzie’s youth. “I didn’t really see what tied these songs together until I was looking for an album title,” he admits, “and that theme seemed to envelope them all – the idea of finding yourself, where you want to go, and who you want to be in that confusing time of life.”

Since Adolescent Nature’s release, Menzie has been in even higher demand, earning one of two spots in the inaugural East Meets West collaboration between the ECMAs and BreakOutWest as well as slots at prestigious events like the Edmonton Folk Festival, Canadian Music Week, Folk Alliance International, and others.

But even as excitement behind his breakthrough continues to mount, Menzie already has his sights set on what’s next – another product of his self-competition and refusal to rest on any laurels. And if he continues on his current trajectory of each new song, each new release eclipsing its predecessor, he’ll soon be impossible to ignore.