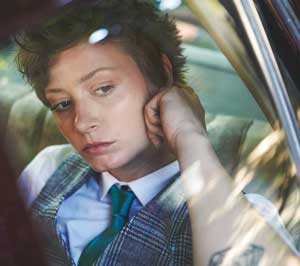 Mo Kenney never had that archetypal I-want-to-be-famous moment. But somehow she was always going to make albums, play live and get noticed in her native Canada and way beyond.

Maybe the clues were there in the way she saved up her lunch money to buy records, begged her parents to book guitar lessons for her and made demos in the modest recording facility at a school she wasn’t even attending. Now, Kenney’s brilliantly accomplished ‘In My Dreams,’ one of Canada’s most acclaimed records of 2014, is about to become one of the freshest and most inventive releases on the international stage this autumn.

And stage is the word, because the artist, born in Halifax, Nova Scotia, views staying on the road and playing for as many people as possible as her life’s work. The reward is in the recognition she’s enjoying from her discerning album audience.

‘In My Dreams’ is already an award-winning follow-up to Kenney’s much-decorated, self-titled debut of 2012. The new set swiftly secured an ECMA (East Coast Music Award) for Pop Recording of the Year, to sit alongside the same trophy that was bestowed upon its predecessor, which also took a Canadian Folk Music Award for New/Emerging Artist of the Year and no fewer than three Nova Scotia Music Awards.

The sophomore set is produced, as was Mo’s previous album, by Joel Plaskett, the Canadian rock icon who can fairly be described as her great mentor and key creative collaborator. It was recorded in his bespoke studio, New Scotland Yard, in Dartmouth, Nova Scotia, and for his label, New Scotland Records.

In an undeniable progression from the sometimes acoustic folk-pop of the first record, the rockier framework of the new one reflects the fact that Mo is working more often with a band, in the studio as on stage. It’s also a perfect showcase for her incisive lyricism. “That’s something that’s changed a lot from when I started writing, when I guess there was a lot more covering up of the truth,” she says. “I’m more direct now, and I like it that way.”

The album’s flagship song ‘Telephones’ arrives with a suitably engaging and amusing video and provides an imaginative take on the traditional romantic predicament. It was first written and recorded by Canadian East Coast rock band Mardeen in 2008, and suggested by Plaskett as potentially rich material for Kenney. “I don’t think very many people knew of it,” she says. “But it was kind of a perfect fit.”

Mo is now reaping the rewards of the musical inquisitiveness that started at an early age. She’ll happily admit to the poptastic pre-teen period we all go through, when she momentarily favoured Danish hitmakers Aqua. There was even a stage when she was at home to hard rock, in the form of AC/DC and Ozzy Osbourne.

But then Kenney realised that instead of just listening to the guitar, she should be playing it. Unlike many artists who were dragged kicking and screaming to their first instrument, she begged her parents to arrange guitar lessons for her. “I’m not sure why I wanted to play guitar so badly,” she says. “I don’t even remember asking my mum to put me in lessons, I was that young.”

When she started to experiment with her music, fate took a hand. “There were a few bands recording at this school in downtown Halifax,” she recalls. “I didn’t go there, but I knew some people who did. They had a little makeshift studio where everybody could just go in and make demos, and Joel came to talk to us one day about the music industry, trying to give us advice on being a musician.”

“So we played him one of our songs each and that was it, he went away. I think that was about 2007, I showed him my song, he really liked it and then I didn’t hear from him. In 2010, I got a call from his manager, who’s now my manager, inviting me to a songwriting camp.”

When Plaskett went on to sign Kenney to his label, she had the platform from which to create that debut album, and to find out about the music business. “It was a huge learning curve,” she admits. “I had an idea in my mind what it was going to be like, and it was totally different. I was just really fascinated by how everything works.”

As well as having toured in Canada with Plaskett, Ron Sexsmith and extensively in her own right, Mo is already no stranger to international audiences. She has played Iceland Airwaves, The Great Escape and Green Man Festival in the UK, where early in 2014, she toured for six weeks with her good friend, Scottish artist, Rachel Sermanni. Kenney is heading back to Britain, Ireland, and Germany in support of ‘In My Dreams.’ The stage is literally set for her.

“Besides writing, the aspect of being a musician that I like most is playing live,” says Kenney. “I love touring, so if I can build up audiences all over the place, then I can stay on the road forever, which is what I want.”