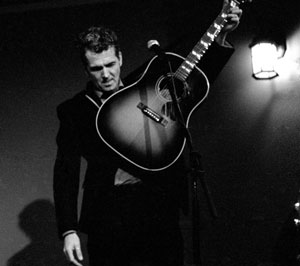 After soaking up musical experiences in Toronto, Montreal, Phoenix, Austin and New York, roaming troubadour Nudie now hangs his Gibson guitar in Charlottetown, PEI.  Why so much traveling?  “That’s what the world’s for” quips Nudie, whose name is a nod to Nashville’s rhinestone cowboy tailor Nudie Cohn.  Nudie’s decades long performing career has landed him on the stages of the Philadelphia, Montreal and Ottawa Folk Festivals, Willie Nelson’s end-of-tour party in 2006, a support slot with Marty Stuart & The Fabulous Superlatives, and official showcases at Folk Alliance and Americana Music conferences.  His authentic songwriting style steeped in heartbreak and twang is captured on his 2008 debut with Nudie & The Turks, and 2 solo albums.  His latest offering, Everything’s Different In The Night (out April 22, 2016), is a collection of songs about relationships, and stories from the road, including “Mr. Why’d You Come To Texas”, a duet with Sylvie Smith (Evening Hymns) about not knowing how to two-step, and “Train You Took My Baby”, inspired by a trip across Canada.  Nudie continues to captivate audiences with his upbeat and charismatic performances, with plans to tour throughout North America in 2016.

“When someone recommends an album to you and calls it a mixture of Chris Isaak and Dwight Yoakham, you sit down, shut up and listen.” – The Coast, Halifax