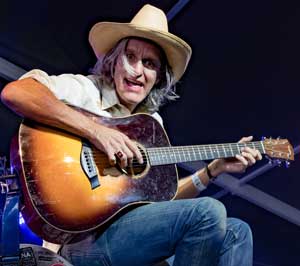 Born among the hearty seafaring folk of Canada’s Halifax, Nova Scotia, Poltz has lived most of his life in Southern California, where the sun treated his rocky Canadian DNA like clothes in a dryer. Naturally a spectrum of cultural and emotional tensions arose and he eventually sought refuge in the art of songwriting, where he tapped into an unforgettable and often horrifying depth of unhinged genius.

Among the music cognoscenti, Steve Poltz is regarded as one of the most talented and prolific songwriters of our time. His songs have been among the longest running ever on the Billboard Top 100 and they regularly appear in movie soundtracks, television shows, and even the odd commercial. His touring schedule is ferocious, ping ponging between continents with enough frequency to earn him manic followings in scores of different accents and languages.

Any musician who has traveled as extensively as Poltz will have their share of colorful road stories, but Poltz’ adventures read like a bucket list. Starting out auspiciously, Poltz recalls meeting Elvis Presley at a small airport and beaming proudly as The King hugged his sister for an inordinately long time. Growing up in Palm Springs, California, he trick-or-treated at Liberace’s house and was Bob Hope’s favorite altar boy. In an alcohol-soaked haze, he infamously accosted David Cassidy, who had summoned him to Las Vegas to write a hit song for the aging Tiger Beat cover boy.

His rich and colorful legacy is the stuff of legend, but it is his distinctive style of songwriting that has caused the world to offer up its stages, clubs, and alleys. Poltz’ sound is entirely unique- from his inhuman fingerstyle techniques to the inimitable melodies that roll from his guitar like cool waterfalls, you know a Poltz song as soon as you hear it. To see Steve to perform live is one of the most entertaining shows a human could ever see. Frenzied, aggressive, hilarious, and heartbreakingly sincere, his live performances have become bona fide events, with sub-cultures popping up all over the globe to entice him to come and tour. As relentless as he is in concert, he is also the guy who famously co-wrote the timeless ballad “You Were Meant For Me” with platinum-selling songwriter Jewel. Of course, because we’re talking about Steve Poltz, it should surprise no one to learn that the song was written on a lazy Mexican beach, where Poltz and Jewel were soon snapped up and sequestered by Mexican Federales and required to witness and eventually assist in a large marijuana bust on the beach. Don’t believe it? See for yourself in the pictures on his web site.

Music fans have adored him since he first fronted the hallowed punk-folk legends, The Rugburns, whose live shows earned the band a following that is best described somewhere between the terms “cult” and “crazed substance-abusing fanatics.” Once touring over 300 days a year, the Rugburns occasionally reunite for wildly popular sold-out shows.

Poltz’ solo body of work is an impressive collection of ballads, rockers and uniquely melodic acoustic numbers that reflect his incomparable style of alternate tunings and savage finger picking techniques. Guitar geeks fall prostrate at his feet trying vainly to learn how to play his stunningly gorgeous and deceptively complex songs. To see him play guitar is a visual feast so frenetic that close proximity to his playing exposes one to risk of seizure.

His albums reflect the depth and expanse of his influences throughout the years (One Left Shoe, Chinese Vacation, Traveling and Unraveling). He has also released a children’s album (The Barn), a performance DVD (Tales From The Tavern) and a collection of other recordings that defy categorization, such as Answering Machine – a 56-track collection of 45 second “songs” culled from his answering machine’s outgoing messages. Neil Young has ranked it as a favorite album.

Steve Poltz’s latest recording project brought him back to Halifax, where he collaborated with Joel Plaskett, an award-winning Canadian songwriter, performer, producer and eminently kindred spirit. The two holed up in Joel’s Scotland Yard studio with a 2 inch,16 track analog tape machine, a 24 hour work ethic, their comfy clothes, and all the mojo they could conjure. The result was Dreamhouse,” Steve’s most accomplished and focused album to date. Critically acclaimed across the globe, it has been singled out by some critics as the 2010 Album of the Year.

His live shows have captivated audiences far and wide with a mix of singing, storytelling, shredding, and the occasional spoken word rants which have been known to incite riots. He can take an audience from laughter to tears and back again in the space of the same song. Steve Poltz transcends the word “talented.” He is unforgettable in all the right ways.