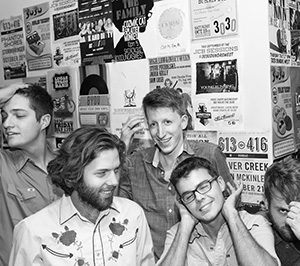 Like a musical locomotive hurtling ’round the bend, Union Duke is a Toronto folk quintet that’s taking the world by storm – one captivating performance at a time. Bridging soulful indie rock with bluegrass and country, these city-slickin’ whipper-snappers unleash soaring vocal harmonies over heel-stomping beats, in a growing collection of irresistible songs that set hearts and dancefloors ablaze.

Union Duke’s 2014 release Cash & Carry was recorded in a log cabin in the Ontario woods and features songs of love, loss, and a cheap shirt. On the heels of 2013’s Bandits & Bridges, these five energetic troubadours delivered their second self-produced record in as many years, and their runaway train shows no signs of slowing. Currently, they are working on their third studio album scheduled for release in Summer 2016.